I first became aware of Michael Cooke in the 1990s when I was an occasional customer at his plant nursery on Sydney’s northern fringe. Belrose Nursery was, then, one of the last ‘proper’ retail plant businesses that grew and sold exciting and hard to get plants. Gardeners and landscapers would battle the intolerable Sydney traffic just to seek out his interesting range of perennials and other ornamentals. Since closing the nursery in 2009 Cooke has concentrated on landscape design and in this lovely book (his second) we see some of his treasured gardens, all from New South Wales. 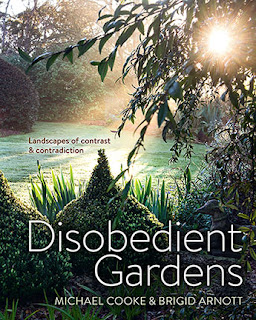 Cooke began designing gardens in the early 1980s and later in his career became a leading advocate of ornamental grasses in landscape design. His reputation soon gained attention overseas and in 1997 he was – I seem to recall - the first Australian landscape designer chosen to appear in the influential UK magazine Gardens Illustrated.

While Cooke does not write much about his influences in this book the works of Piet Oudolf and the late James van Sweden are evident in many of his designs. Despite this, Cooke’s landscapes have a distinct personality all of their own and he merges international influences with the practical realities of gardening in Australia. While mass groupings of ornamental grasses are seen in all of the five profiled rural gardens, Cooke successfully mixes them well with other plantings such as spiral hedges, succulents, ferns, water plants, tropicana and roses.

While his planting palette is diverse he seems to prefer using exotics rather than native plants. For this observer at least, this planting bias gives his gardens a very European or North American contemporary minimal look. Cooke’s gardens have a controlled looseness and informality which will appeal to many who prefer gardens dominated by plants rather than hard landscaping elements. Cooke touches on this in his introduction to Disobedient Gardens:

“When I look back at images of the gardens I’ve designed, I look for similarities – common threads that bind them. Certainly, some plants and colour combinations are repeated, and I also clearly admire the aged, weathered finishes that only time and patience can achieve, as this is also something often seen in my designs. Yet the thing that strikes me most vividly is the contrast between wild and manicured plants. This reoccurs in all my gardens to varying degrees, depending on both the season and the owners’ inclinations.” 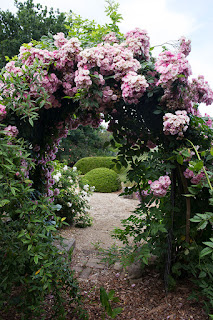 Books such as this often act as a ‘calling-card’ for the profiled designer. This is true in this case too, but unlike some high profile landscapers - who have a reputation for disappearing soon after the garden is completed - we discover Cooke relishes having an ongoing relationship with his clients and many have become good friends.

In keeping with the provocative title of the work, Brigid Arnott’s photos add much to the distinctiveness of this volume and her images help break the publishing convention of only showing the garden in ‘styled’ perfection. Therefore, we see images that subtlety challenge the paradise-garden architype - there’s washing hanging on a Hills Hoist (no socks and undies though), upswept leaves everywhere as well as occasional views of hoses and ladders.  Some readers will not like this looseness, but for this writer anyway it makes his gardens seem more liveable and real. The only thing really lacking from this book are plans of the individual gardens and photos of the authors and their patrons.

While the landscapes in this book will be of only passing interest to the small plot gardener they will certainly appeal to landscape designers and home owners with large gardens who are in need of design inspiration. This is a lovely book and warrants inclusion in many horticultural libraries.