politics in the garden

Several years ago while on a visit to Vietnam I discovered a distinctive looking annual bed in a Ho Chi Minh City (Saigon) park. While the plants used in this formal bed were far from unusual - red bedding sage and golden marigolds - the design was certainly eye-catching.  At the centre of the planting was the hammer and sickle, the best known symbol of the international communist movement. While I had seen images of the hammer and sickle on my travels in the past I had never seen the emblem replicated in flowers. What made the planting scheme even more bizarre was that above the annual bed was a hoarding advertising Samsung electronic consumer goods; perhaps, a fitting image for contemporary Vietnam.


Reflecting on the hammer and sickle image I thought about other political signs or slogans which had been replicated in nature. One that quickly came to mind was the amazing discovery found in a pine plantation near Berlin in the early 1990s. During a low-level aerial survey a swastika patten was visible in the forest below. It is believed that the trees were planted in the late 1930s by local Nazi Party sympathisers. The golden colour was formed by larch trees - a deciduous conifer - during their brief autumn colouring prior to needle-drop. Shocked by the discovery local authorities removed most of larches in fear of the forest becoming a Nazi pilgrimage site. 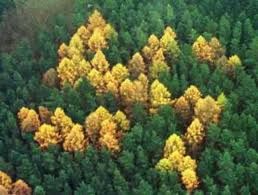 While idological symbols in gardens are certainly unusual, politics is never far away from how we live. While nearly all garden writers choose to ignore politics and ideology in their work, British garden writer Martin Hoyles has embraced the theme from a socialist viewpoint. Hoyles has written several books on garden history where political perspectives have been central, most notably in his 1991 Story of Gardening (Journeyman Press, London). While most standard garden histories eulogize the journeys and adventures of plant collectors, Hoyles believes that these developments reflect the plunder of the natural world to serve the interests of colonial expansion and elite western collecting tastes.

Hoyles' books are highly recommended as they make us challenge our standard views on the history of gardening. Although hard to find they can be sourced at Floreligium (Australia's specialist garden bookshop) in Sydney or (dare I say it) via the internet.
Posted by Silas at Friday, February 24, 2012 1 comment: