Despite its immense size Australia has surprisingly few islands off its coastline when compared to other large landmasses. One of the most distinctive is Lord Howe Island, 580 km off the northern New South Wales coast. A small crescent-shaped volcanic remnant, the 9 km long island is dominated by the dramatic twin peaks of Mt Lidgbird (777 m) and Mt Gower (875 m).

Depending on the time of year Lord Howe is home to between 250 and 700 permanent residents and tourists as well as a diverse and distinctive range of flora and fauna. The island was first discovered in 1788 by the HMS Supply under the command of Lieutenant Henry Lidgbird Ball. This was the island's first human contact but permanent settlement did not begin until 1834.  The island is named after Richard Howe who was the First Admiral of the Royal Navy at the time of its discovery.

Flying into Lord Howe from the mainland is one of the most exciting air journeys you can ever do. After crossing over seemingly endless water you suddenly spot the island jutting out of the ocean. After a picturesque reconnaissance circuit the Qantas Dash 8 prop plane descends and comes to a dramatic halt on the tiny 900 metre runway in the middle of the island.

The flora of this small island is a mixture of native and exotic plants growing in a dramatic coastal setting. Unlike almost everywhere else in Australia you won’t find the usual types of dry sclerophyll flora here. Instead Lord Howe offers the visitor a cocktail of unique endemic vegetation (105 of the 243 species of natives on Lord Howe are limited to the island), South Pacific regional coastal flora and tough-as-old-boots international horticulture standards.

The most common endemic plant growing on the island is the kentia palm (Howea forsteriana) which is a grown as an elegant indoor plant internationally. They're everywhere, from formal plantations as well as wild in the fertile valleys of the uncultivated lower parts of the island. The kentia is just one of four indigenous palms found here. Other distinctive locals are the berrywood (Ochrosia elliptica), an attractive glossy leaf small tree and the wedding lily (Dietes robinsoniana).

Sadly, not all is perfect in paradise. The island would have been pristine when humans first arrived, but it did not take long for decay to set in. Goats and pigs were introduced as a food source and they soon went feral defoliating many plants. Not long after mice and cats turned up, and early last century black rats swam to the island from a beached ship. The rodents decimated thousands of native birds, insects and plants leading to mass extinctions and endangering the populations of many others.

While many of the animal pests have been removed or controlled the rats are a persistent problem. The small community and its administration – the Lord Howe Island Board – are evenly divided over what should be done to control them. Some conservationists want a one-off mass extermination of the rats by aerial bombing while many residents feel this is unnecessary and dangerous. In 2015 the islanders voted on the proposal in a referendum with the extermination option winning by a small majority.

The introduction of kikuyu grass has also been disastrous for small birds and animals. When regularly mown this African pasture turf is ideal for a frost free warm temperate climate but when not trimmed it becomes a dense jungle undergrowth which is almost impenetrable to small birds and animals.Weeds such as bitou bush, cherry guava and asparagus are a major issue here too. Luckily there's no evidence of lantana and blackberry.


Lord Howe Island is not a backpacker’s destination as it's expensive. You have to have booked accommodation to visit, there's no camping, and the flight from Sydney, Port Macquarie and Brisbane is pricey. Fruit, vegetables, groceries and drinks are costly because everything comes to the island by ship or plane. So if you visit try to squirrel as many supplies into your luggage as possible.

Despite its many problems, this World Heritage listed island remains a real paradise on earth. Every corner of the island is gorgeous and the locals are very friendly. Beach lovers will think they've died and gone to heaven, but so will enthusiasts of plants, birds and conservation.


words and images © Silas Clifford-Smith
Posted by Silas at Tuesday, August 02, 2016 No comments:

"One of the first things the lover of flower gardening should do is to get a clear idea of the distinction between gardening and botany. Gardening is an inexhaustible art; botany is a world science, and the great mistake is to consider gardening from the point of view of the botanist."

William Robinson, writing in the Preface of the 1934 edition of The English Flower Garden 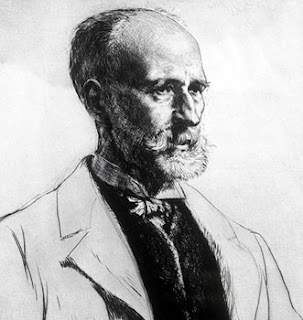 Image of William Robinson courtesy of telegraph.co.uk
Posted by Silas at Monday, August 01, 2016 No comments: