One group of plants which came into its own in the perennial revival boom of the late 20th century was the ornamental flowering sages of the Salvia genus. Today there are over 150 different salvias available in Australian plant nurseries. Most of these have been imported over the last 25 years, but there are some which have been grown in our gardens for nearly two centuries.


For many the best known salvias are the common culinary sage (Salvia officinalis) and the scarlet red bedding sage (Salvia splendens) both of which were growing in Australia by the middle of the nineteenth century. The culinary herb may have been the first sage imported into the colony while the red bedding sage probably came here in the 1840s, although it was not listed on plant catalogues until the early 1850s.


Another early import was the red flowered tropical sage (Salvia cocinnea). This plant is much gentler on the eye than the red bedding sage and also comes in a white flowered form. Its self-seeding habit has made it a weed in tropical areas of the world so it is hard to find on local seed lists. Despite this it can be found in old gardens and grows easily from seed sown in spring or early summer.

The most popular blue flowered salvia was the gentian sage (Salvia patens). This beautiful plant appears in almost all nursery catalogues from the 1850s and seems to be one of the most popular perennials used in nineteenth century gardens. Being hardy to light frost it is an ideal plant for most temperate climates although it has a tendency to spread by vegetative growth.


Apart from Salvia splendens (which was used in mass plantings), most nineteenth century salvias were used simply as filler plants in large garden beds. Although they never enjoyed the popularity of fuchsias, carnations, or geraniums, the salvias’ long flowering habit and ease of propagation would have made them a hard plant to ignore in the nineteenth century Australian garden. Perhaps owners, gardeners and designers of heritage gardens will review their planting selections to include some of these much-loved early perennial favourites.

While a limited range of salvias are available from most nurseries the best range is available from Sue Tempteton's Unlimited Perennials nursery at 369 Boomerang Drive, Lavington 2641, NSW. Tel 02 - 6025 4585. Sue has a mail order service and website http://www.salviaspecialist.com/ 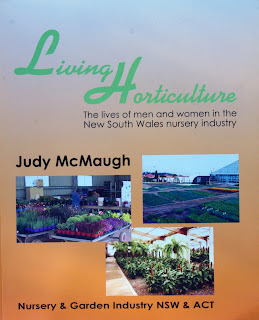 Beginning her research in 2000, McMaugh soon discovered that it was beyond her ability to document the entire history of the local nursery trade especially the early developmental period in the nineteenth century. She therefore limited her scope of study to nurseries active after 1900.

The book includes studies on a broad range of nurseries. These include general production nurseries, specialist plant growers as well as general retailers. Most of the 160 plant nurseries listed were active in the period following WW2 and are linked in some way to the publishers industry association. This nursery industry association connection may explain why a number of important nurseries are not mentioned in the book. Living Horticulture is well laid out but has the most atrocious cover I have seen in ages and I’m sure this will be a turn off many potential readers.

One of the highlights of the book are the many photographs used to illustrate the work. There are dozens of shots of nurseries showing displays, production sheds, shop fronts and nursery staff. I especially loved the images of the old Rast Brothers from Turramurra, Paul Sorensen’s Leura nursery in 1932, and the modern Baulkham Hills Garden Centre in c.1959.

Judy McMaugh should be congratulated for her work in uncovering the lost history of so many local nurseries. This book will be popular reference with garden historians and should be included in every NSW public library collection.